As human body's largest organ, skin has the most extensive contact with the outside world. Among its multiple functions, one is for protection. Nowadays, our skin is damaged due to environmental change, air pollution, unhealthy living habits, and improper use of skin care products.

Then how to solve three common skin problems?

1. “Promoted Appearance” after medical cosmetology is in the need for careful care.

Especially suitable for skin with wounds and dry, sensitive skin after medical cosmetology 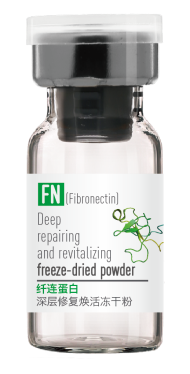 2. With soothing and repairing lysozyme essence, it will intensively replenish skin-repairing energy for skin.

Compared with the control group, FN has obvious promotion effect on cell migration, suggesting that it has the ability to repair tissue damage.

「Fibronectin's ability to repair damaged skin rivals that of EGF」

2. Adolescence comes with “Acne” as well as “Mask Face”.

Blackheads, acne and pustules are caused by exuberant sebum secretion and too much sebum secretion due to endocrine increase during adolescence. Regular makeup will also make pores blocked, coupled with the current epidemic, consequently, “mask face” has also been an obvious characteristics of majorities. Skin problems keep bothering majorities such as acne, local redness, itching, and inflammation.

2.Fused with gel-texture essence, it can quickly help you to achieve the effect of first aid based on its features of being fresh and not greasy.

Before use, there were acne on the subject's cheeks, and pores were bulky. The local redness was found, and skin inflammatory reaction was obvious in the red zone mode; After 7 days of use, the color of cheek red area faded and the inflammatory reaction improved; the product combination shows obvious acne removal effect within 7 days. 3. The damage to skin from the outside world and by artificial reasons.

1. Effectively repair damaged sebum of sensitive skin and restore skin to a healthy and vital condition.

And finally, repair skin dryness and fine lines caused by lack of moisture.

So What is Fibronectin？